The origins of Catholic higher education in Lille

On 12 July 1875, the French National Assembly adopted a bill of law, passed 316 votes to 266, allowing the free establishment of higher education.
The Catholic community in the Nord – Pas-de-Calais region had already laid the groundwork for the development of higher education in Lille, offering courses to the public in 1874; the new law now allowed them to build an institution that has served Lille and the region as a whole for nearly one and a half centuries under a variety of names: the Catholic Institute (1875), Catholic University (1877), Catholic Faculties (1880), Lille Polytechnic University Federation (1974), and the Lille Pluridisciplinary University Federation (Fédération universitaire et pluridisciplinaire de Lille).
Created by and for the laicity, the Université Catholique de Lille was actively supported by local bishops and a group of Christian industrialists, including Camille Feron-Vrau and Philibert Vrau. The university was initially comprised of three Faculties: Law, Letters, and Sciences. The College of Theology and Faculty of Medicine would quickly follow, completing the ensemble. Vocational schools quickly grew up around the five faculties, establishing the unique nature of the institution. The university’s priorities are education, research, and service to society; academic knowledge being augmented by courses with a professional objective, requiring know-how and skills developed through innovative pedagogies.
The Université Catholique de Lille was solemnly inaugurated on 15 January 1877, upon reception of a pontifical bull granting the institution canonical status. 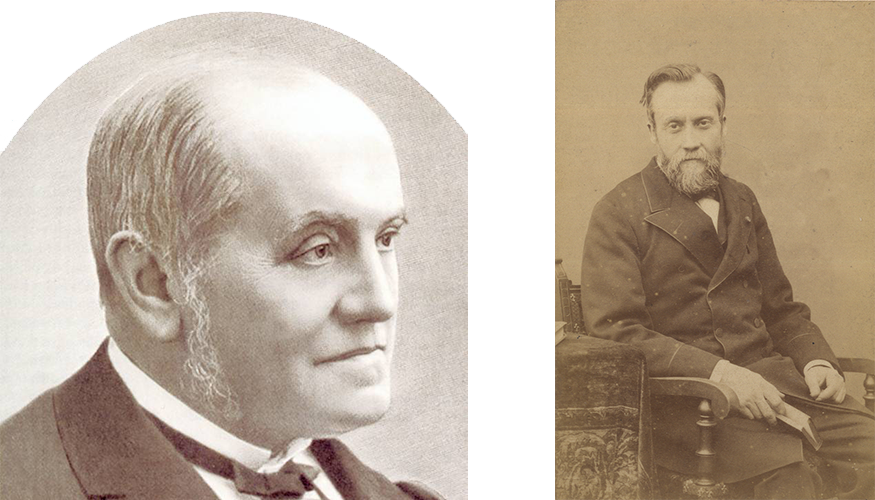 For some years, courses were given in various buildings in Vieux Lille, notably in the former mansion of the French Intendant, now the Archbishop’s residence, at 68 rue Royale. As the space was rented only temporarily, it was necessary as soon as possible to build buildings able to accommodate the various faculties, but also the professional schools, whose needs were quickly apparent.
Following several information campaigns, the founders decided on a neo-Gothic architectural style modelled on some Anglo-Saxon institutions, but affirming the Catholic character of the institution.
The land was acquired in 1877 along the Boulevard Vauban. Belgian architect Baron Béthune d’Ydewalle, in close connection with the first Rector, Mgr Hautcoeur, drew up initial plans whose complexity frightened the administrators. In the end, it was Louis Dutouquet of Valenciennes (1821-1903) who created a simplified, more functional set of plans for the project.

The first phase involved the area around the main building:

The second phase extended into the surrounding area:

The third phase, while delayed by World War I, allowed completion of the original plan on time for the celebration of the institution’s 50th anniversary:

Construction on the “Academic Palace” or Hôtel Academique, the centrepiece of the Vauban campus, with its 125m long neo-Gothic façade, was begun on 22 November 1879 and completed by the autumn of 1881. The building was originally home to the Faculties of Letters, Law, and Theology; the Faculty of Law later left the building to settle in the Robert Schuman building, across Rue du Port. The library, which constituted the wing of the building along Rue Norbert Ségard, housed valuable manuscripts and incunabula. The collection would ultimately move to the new “Bibliothèque Universitaire Vauban” on Rue du Port. The Hôtel Academique remains the principal building of the Université Catholique de Lille, and hosts the offices of the Presidency and some administrative services. The Faculty of Medicine, across Rue du Port, was constructed in 1882 in the middle of a botanical garden. Following the renovation work completed in 2016, the building was named after physician and entrepreneur Camille Féron Vrau.

A brilliant student at Valenciennes and then the School of Fine Arts in Paris, friend to sculptor Jean-Baptiste Carpeau, this baker’s son and native of Hasnon (in the canton of Saint-Amand-les-Eaux), returned to Valenciennes in 1848 to become an architect. Specialising in the construction of religious buildings, he designed the colleges of Notre-Dame in Valenciennes and Saint-Jean in Douai, along with twenty churches, including Saint-Vaast and Notre-Dame du Sacré-Cœur in Armentières, and the churches of Douvrin, Saint-Saulve, Bruay, and Vicoigne. In 1879, he began work on the Université Catholique de Lille, neo-Gothic in style like many of his designs, for which he was awarded the Cross of the Order of Pius IX.

Built of brick accented with white stone in a neo-Gothic style, the residence is of a piece with the other original buildings on the Vauban campus, with one notable difference: the columns and arches chosen by the architect Henri Meurillon. The Albert le Grand residence, at the corner of Rue Norbert Ségard and Boulevard Vauban, was the first project to get underway in 1879, with the intention of protecting foreign students from the dangers of the big city.

The chapel was started in 1911, following plans by architect Jean-Baptiste Maillard, disciple of Baron Béthune, and completed in 1925. It is a vast edifice in light red brick accented with white stones in the form of a Latin cross pierced by two rows of superimposed bays. At its blessing on 18 November 1924, the chapel was dedicated to Saint Joseph, patron saint of the university. The stained-glass windows were not yet in place. In 1929, Mgr Emile Lesne, the University Rector, organised a competition for the stained-glass design, with a specific theme: a catechism for the students, like a Way of the Cross moving from window to window, starting from the small door to the right of the choir, the entrance from the main building. The windows represent 36 Gospel episodes, from the Nativity to Pentecost.

The Coat of Arms

The university blason was developed even before the university was officially founded, around 1870. It highlights both the academic and ecclesial aspects of the institution, the tradition in which it is rooted, and the part in its creation taken by the two northern provinces.

Four quarters make up this coat of arms: 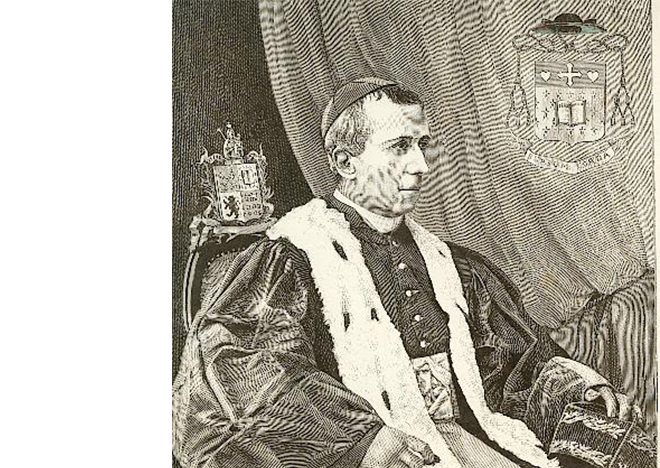 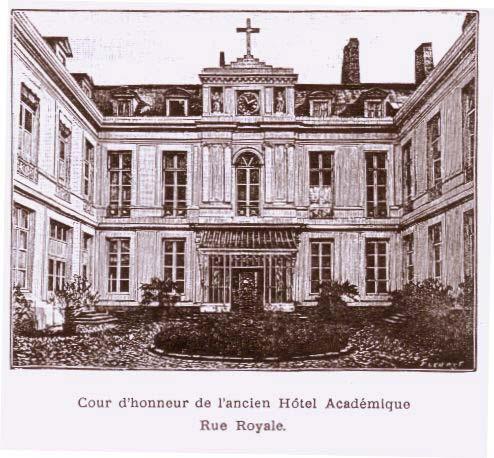 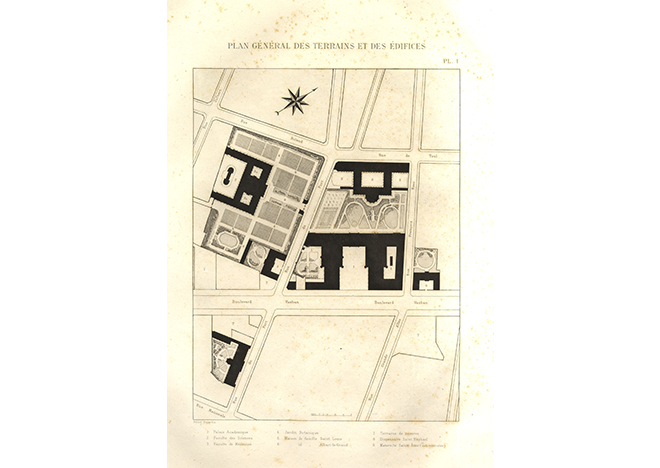 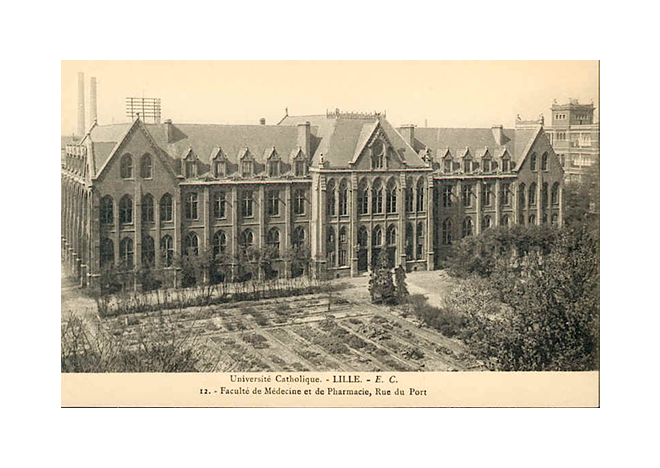 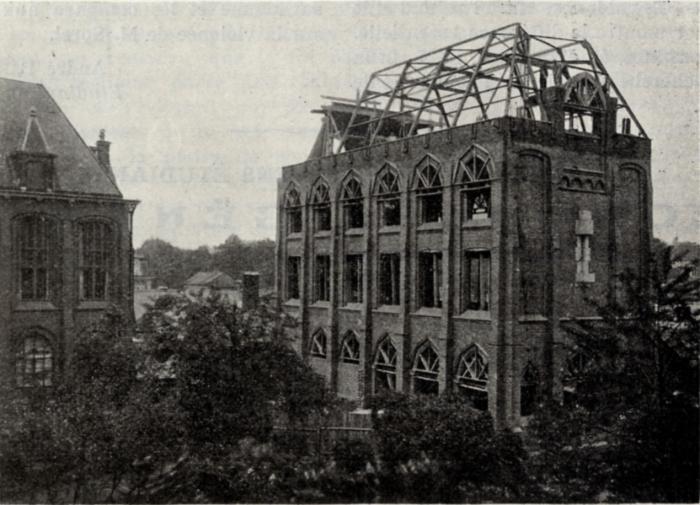 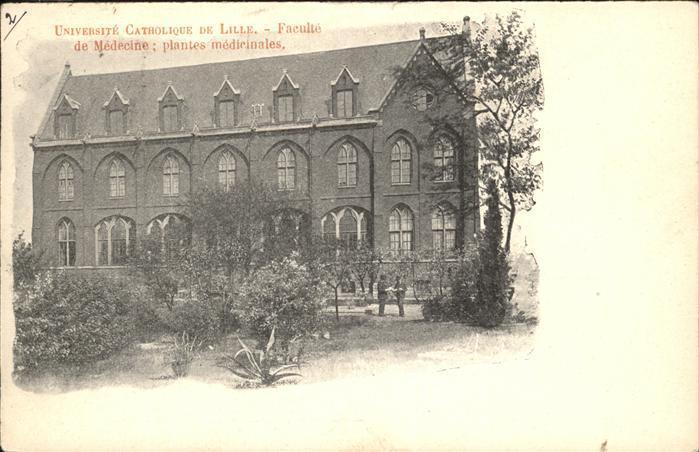 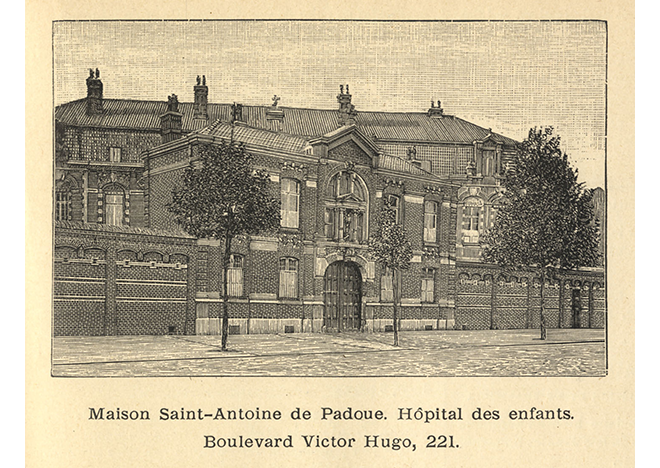 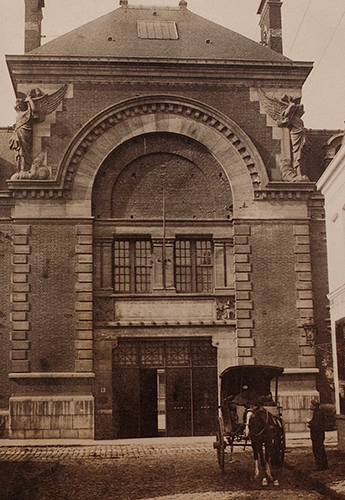 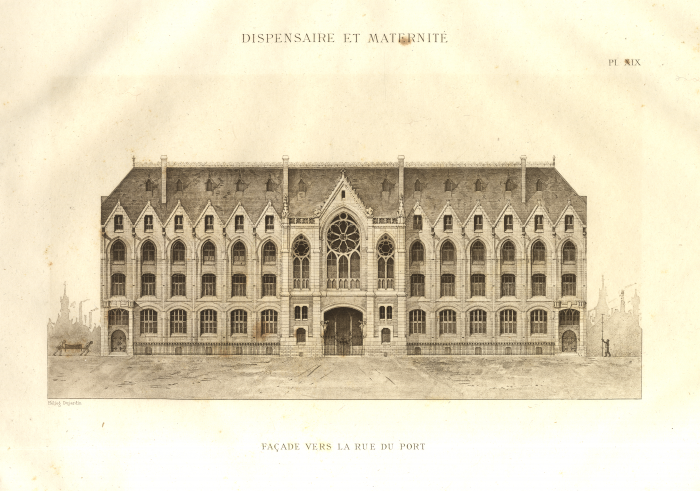 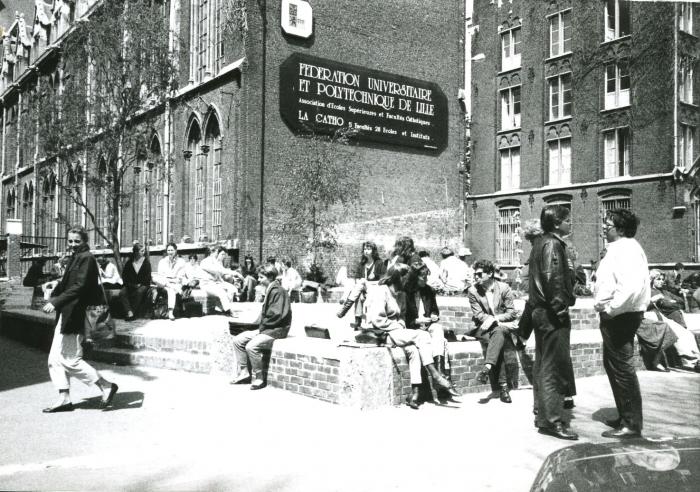 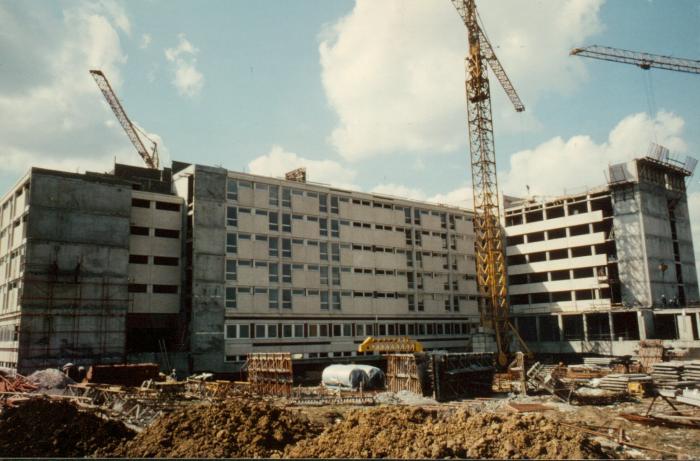 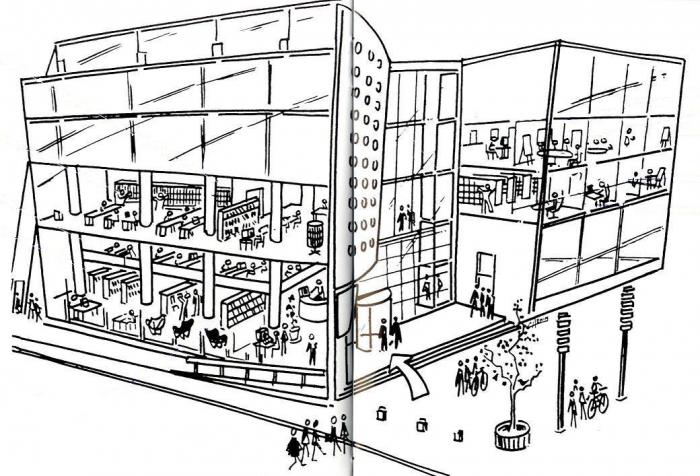 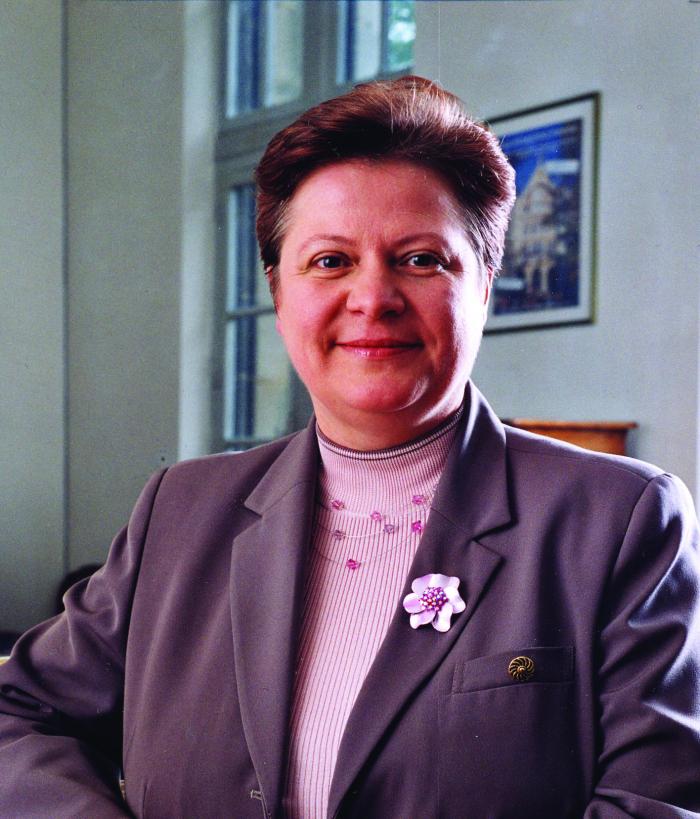 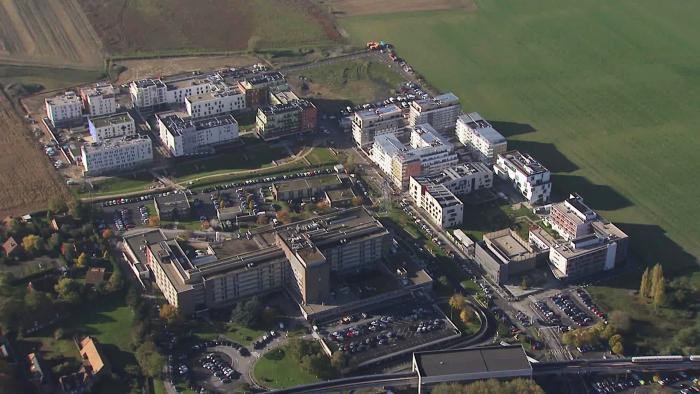 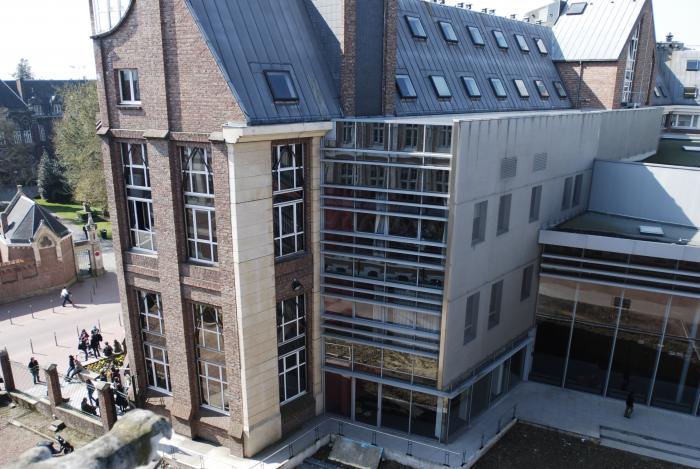 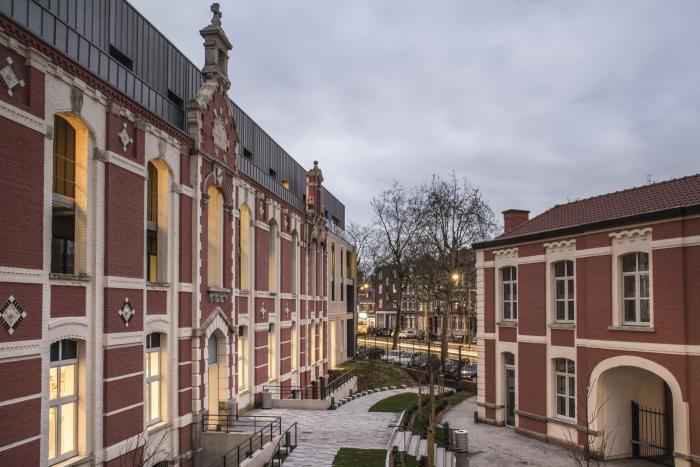